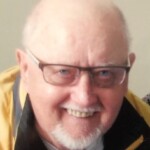 Mr. Larry Greenland passed away at the CHUS- Hôtel-Dieu Sherbrooke, QC, on Saturday March 27, 2021 at the age of 90, son of the late Lawrence Greenland and the late  Gertrude Hayden.

A special thanks to his nephew David Greenland for always being there. The family also wishes to thank the staff of 4A at the Hotel Dieu Hospital for the wonderful care given to Mr. Greenland. They would also like to thank Les Filles de la Charité for the time he spent within their care.

Donations can be made to the FÉE Fondation Email address: Fondationfemmesenfants@gmail.com Mailing address: 2956, Girouard Ouest, Saint-Hyacinthe, Quebec, J2S 3B9 Tel.: 450-230-4049

You are in our prayers. Rest In Peace.

Our sincere condolences to Larry’s family and friends. God bless Uncle Larry, always in our hearts.
David Greenland and family.

So many wonderful memories. Uncle Larry certainly enjoyed his life. Thinking of you all as you settle into a new way of moving forward.
Sending Love and Hugs