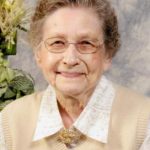 Passed away suddenly, surrounded by her family at the CHUS – Fleurimont, Sherbrooke on August 18, 2012. Edna Garbutt, in her 94th year, daughter of the late George John Knapp and the late Susie May Jackson and beloved wife of the late Ernest William Garbutt Sr. Loving mother of Ernest William Garbutt (Sonia Blanchette); cherished grand-mother of the late Leslie Garbutt and Christopher Garbutt; dear sister of the late Douglas Wilbur Knapp (the late Ivy Secker), the late Gordon Henry Knapp (the late Gladys Grisley), the late Donald Gilbert Knapp and dear aunt of Dorathy Smith of Eliot Lake, ON. Also left to mourn are her great nephews and nieces, other friends and relatives. Resting at the Steve L. Elkas Funeral Home, 601 Conseil Street, Sherbrooke, Qc, J1G 1K4, where friends and family may call on Wednesday August 22, 2012 from 7:00 PM to 9:00 PM and on Thursday August 23, 2012 from 12:30 PM to 1:30 PM. Funeral service will be on Thursday August 23, 2012 at 1:30 PM followed by the burial at the St-Peter’s Cemetery, Sherbrooke. The family would like to thank everyone at the CHUS-Fleurimont (6th and 9th floors) and staff and administration of the Manoir St-Francis Manor for the kind and professional care given to Mrs. Garbutt. As a memorial tribute, donations to the Alexander Galt Regional High School Scholarship Fund would be appreciated. Donation cards will be available at the funeral home.